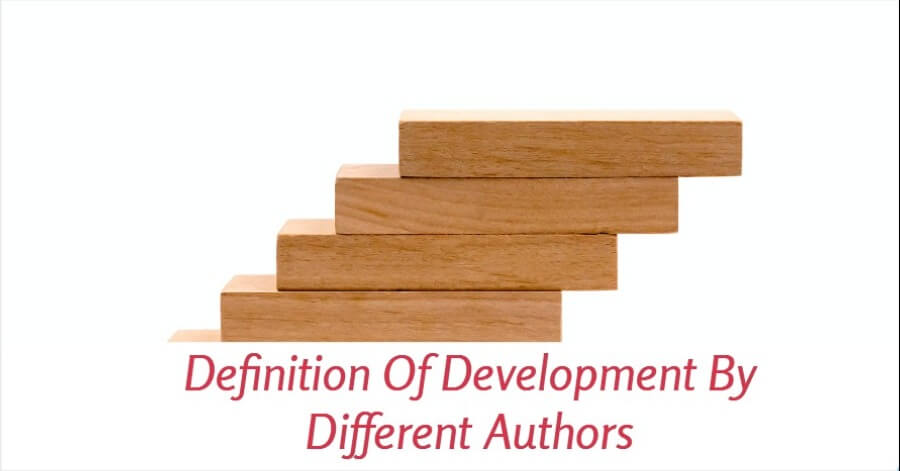 Development is the overall improvement of economic, social, and political conditions. It is not limited to specific regions and times. The concept of development varies from region to region over time.

The term “development” has different meanings in different contexts and may be explained in multiple contexts. Development should be considered as progress toward multidimensional goals such as poverty alleviation, employment generation, inequality reduction, and protection of human rights.

Hurlock(1959) defines, “Development means a progressive series of changes that occur in an orderly, predictable pattern as a result of maturation and experience.”

Pearson (1992) defines development as “an improvement, qualitative, quantitative, or both, in the use of available resources.” He also claims that development does not relate to a single viewpoint on social, political, or economic progress. Instead, it is a hybrid word for a variety of tactics used to transform socioeconomic and environmental conditions from their existing to desired ones.

According to Liebert, Poulos, and Marmor (1979), “Development refers to a process of change in growth and capability over time, as a function of both maturation and interaction with the environment.”

J.E. Anderson (1950) defines, “Development is concerned with growth as well as those changes in behavior which result from environmental situations.”

According to Todaro and Smith (2006:22), development is “both a physical reality and a state of mind in which society has secured the means for obtaining a better life.”

Coetzee (2001:126) defines, “Development is therefore less concerned about human wealth than well-being as its ultimate end, the basis of which are livelihood, security, and sustainability.”

Gran (1983) defines “development as a social and practical process which aims at the liberation of human potential so that people acquire the maximum socially feasible and practical control over all the available resources needed for the realization of basic human needs and security.”

According to Burkey (1993:35), “development is also a process by which an individual develops self-respect and becomes more self-confident, self-reliant, cooperative, and tolerant towards others through becoming aware of his/her shortcomings as well as his/her potential for positive change. This takes place through working with others, acquiring new knowledge, and active participation in the economic, social, and political development of their communities.

Rogers (1990:30) says, “Development is a long, participatory process of social change in a society whose objective is the material and social progress of the majority of the population through a better understanding of their environment.”

Tayebwa states (1992:261) that “development is a broad term which should not be limited to meaning economic development, economic welfare, or material wellbeing.”
As per Tayebwa, “development in general includes improvements in economic, social, and political aspects of a whole society, like security, culture, social activities, and political institutions.”

According to Perroux (1978:65), development is defined as “the combination of mental and social changes among the population that decide to increase their real and global products, cumulatively and in a sustainable manner.”

Development is a procedure that leads to growth, advancement, positive change, or the extension of physical, economic, environmental, societal, and demographic parts. The goal of development is to raise the public’s standard of living and quality of life, as well as to establish or expand local regional income and job possibilities while protecting the environment’s resources. Development is observable and beneficial, but not always instantly, and involves an aspect of quality change as well as the establishment of an environment for that change to continue.

Definition of Society By Different Authors

Tags:10 Definition of DevelopmentMeaning of development by different authors