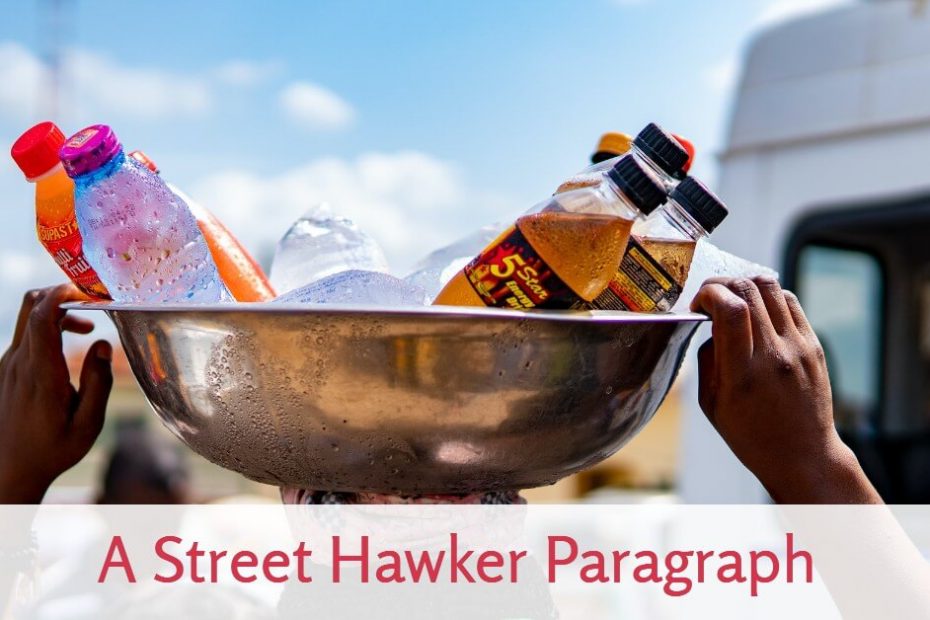 Write a paragraph on “A Street Hawker” in about 150 words.

In your paragraph answer the following questions:

A street hawker is someone who sells goods on the streets. He is a well-known character in the village and town. He dresses up in strange costumes and tries to make strange sounds to draw the attention of his customers. He typically purchases his goods at low prices and sells them at a high profit. His products attract primarily women and children. In general, he sells low-cost items such as cosmetics, toys, fruits, vegetables, clothing, utensils, handicrafts, and books. He promotes his products loudly and tells people to buy them.

Somehow he can manage customers from low-income people. A street vendor is a poor member of our society. He leaves home in the morning with goods on his head or in his hands. A hawker works hard but cannot earn much money. He has little capital and little income. He is struggling to manage his family. So we should respect him for his good service.

A street hawker paragraph for class  9 and 10 (SSC)

A street hawker is a man who sells various items by moving from one street to another. He is a self-employed man. He typically rents a house at a very low price or lives in a slum. He is a well-known character. He can be found almost anywhere in a village or town. He carries his items on his head, in his hands, and in a small handcart. He earns money by selling low-cost items. He often sells items such as toys, cosmetics, sweets, clothing, fruits and vegetables, pots, utensils, and so on.

A street hawker speaks in multiple ways, dresses in colorful cloth, and enjoys playing the horn or raising his voice to get the attention of his customers. He needs to walk for hours to sell his products. He spends his days selling these items. He gets up early in the morning and organizes his goods for sale. He lives a simple life. He has to work very hard to support his family. Even though he puts in a lot of effort, he still lives in poverty. We should be respectful of his hard work and never look down on him.

A street hawker paragraph for class 11 and 12 (HSC)

A street hawker is a man who moves from one place to another to sell his products. He sometimes appears early in the morning. He commonly sells a variety of products, such as toys, clothes, accessories, vegetables and fruits, and so on. He starts shouting the names of the products that he sells. Kids and women are his main customer base. From morning to evening, he walks on the streets. He used a loudspeaker to attract people. He easily convinces the women and children. Thus, he makes some profit.

A street hawker is a low-income person. He lives a very simple life. He doesn’t have much ambition in life. He earns very little money, but he is happy with his earnings. He moves from door to door to sell his products. He sells his goods at a cheap rate that’s why he can easily attract poor people. He works restlessly from morning to evening. Sometimes he cheats with his customers by giving them low-quality products. So people should be careful when buying products from them. Yet he does many things for our betterment. We get many products from him at home. So, we should respect his efforts.